did this picture work right x.x
Click to expand... Check me out. Just work on a video that took me 2 days and it's a Payday 2 anime.. Pretty cool i think

This is my little corner of the world.

Here is setup of mine at current state of the art

1x 32" HD LCD TV (upscaled to 1080p using Nvidia Drivers)
2x 17" LCD Screens
2x PC's (main PC where all recordings of screen and games are made, and backup one just for audio recording)
1x laptop (just in case backup PC get nuts and it is used for sound recording... Primary usage is college work)
2x old webcams as mics (one is in use now, second one is waiting until this make nuts and gave s*it in pants then starts to make rolling it around like crazy cowboy on drugs)
2x crappy speakers (USB powered)
2x headphones (one is in use, second one are waiting for use... Both are same models which is win because I got them for super cheap)
1x smartphone for video recording at 720p
1x smartphone for just in case audio recording (older one, but still usable)

TL;DR - setup is a messy one but works just fine for my case (until I get new monitors and new rig in next year with real microphone not like current webcam as mic idea)

So, that's most of my setup
What can't be seen are the consoles under the desk and the green screen
Don't know what the Top Gun sunglasses are doing there 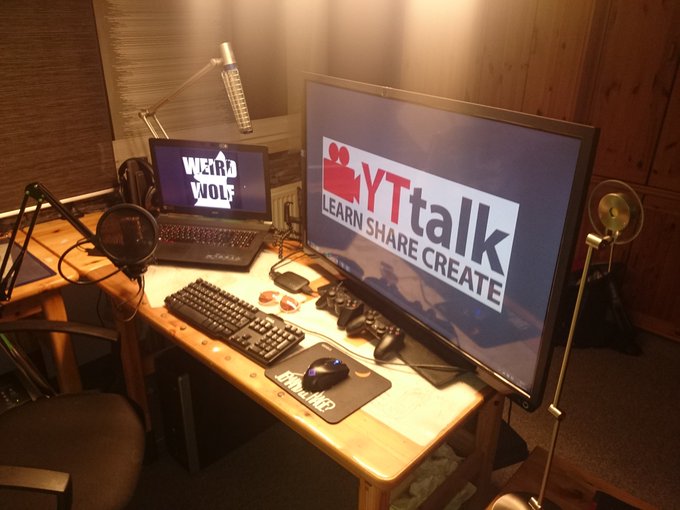 It doesn't look like much now but once this tennant moves out, this will be my new location for Race Grooves Entertainment Studios! Over 3,100 square feet! 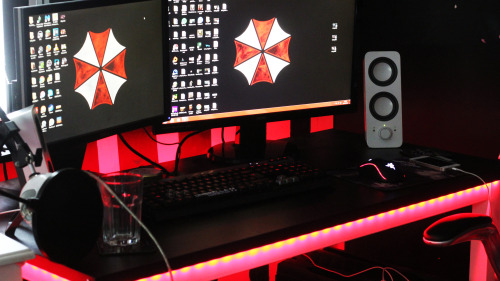 Decided to go with my Gaming set up as it was a little bit more interesting than my recording set up and hey i have gaming channel too so i technically record here so it counts this set up still has a few more things id like to do with it but im quite happy so far.

Thrilloby said:
Check me out. Just work on a video that took me 2 days and it's a Payday 2 anime.. Pretty cool i think

Holy s**t that is one hell of a set up esp those moniter speakers those guys have one hell of a sound the studiowhen i studied music tech used to use them great stuff
Last edited: Aug 31, 2016
Reactions: markkaz

Welp, after seeing all these. good ones, heres my setup:

Not Much i know....
Specs:
Magic Eagle Havit Game Series Keyboard + Mouse
2 Monitors 1080p is my laptop one +
my wide one is 1440p
+
Logitech Headset and
my Blue snowball micstand clamp is broken (for now)

My setup, as it currently stands:
MSI gaming 5 motherboard, i5 processor(soon to be upgraded to i7 and Geforce GTX 1060 gpu
Twin ViewSonic 22" HDTVs used as monitors.
CAD Audio D82 microphone piped through a PreSonus Audiobox USB unit.
I keep a notebook on the desk to help synchronize game video with facecam video... maybe I should start using it to schedule my videos. lol sorry, I don't know why the picture decided to turn itself on it's side. *shrug*
Last edited: Sep 25, 2016
Reactions: markkaz

So I figured I'd go ahead and show my setup since it's finally all put together.